So our second soapbox challenge took place last week and we are thrilled to announce we raised an astonishing £19,500! To say we are chuffed is an understatement! 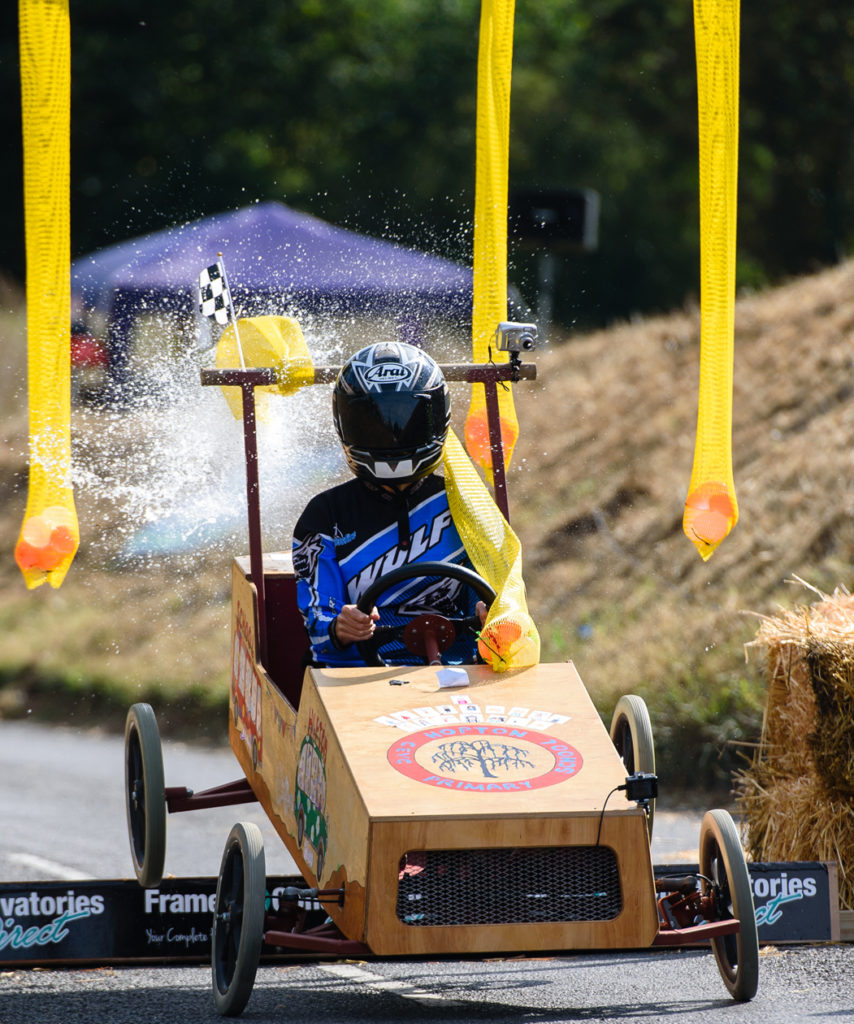 The day started nice and early at 6am when Mount Road was officially closed to traffic. It was then all hands on deck as we unloaded 100 crowd barriers, 100 road separators and 200 straw bales to line the course!

This year we had so many amazing volunteers and they were all just fantastic. Before we knew it, the course was complete with staging, ramps, jumps and a chicane, Soapbox City was ready to receive the teams and the food stations were up and running.

21 teams soon turned up and we could finally see the soapboxes we’d been hearing about over the past few months and they were just brilliant. We had a police riot van, Del Boy’s yellow Robin Reliant, a Formula One racing car, a space warmer and a ball pit to name a few. The work that the teams put in was just incredible and they were all excited to race them.

At 10.30am we walked the teams up the course ready for the action to start. It was wonderful to see so many people turn up to cheer them on. Children waved chequered flags and the music blared out as we reached the top.
Each team then took to the stage where our judges, Richard Hope from Treatt, Steve Dunn and Jan Bloomfield, marked them on their soapbox. Teams then danced to the likes of the Anchor Man theme tune, Men in Black, The A Team and Pirates of the Caribbean. Some were good, some were bad and some danced like their dads but it was up to the judges to choose their favourite.

Once the team had performed their presentation the soapbox and its driver were pushed off the ramp. They headed to the first jump which was a window frame courtesy of Frames Conservatories Direct and which contained water balloons that burst when hit! They then sped down to the chicane of straw bales and another jump before hitting the laser beam to mark their time to the finish line.

When all teams had completed their run we had a quick break and then back up the course for round two. This time it was all about the speed and the drivers were certainly much braver! Most improved on their time or, if it was slower, it was usually due to an over enthusiastic driver losing a wheel or landing in a straw bale!

Feedback was amazing for the day and it was just wonderful to see so many happy faces enjoying the sunshine and the entertainment. Huge thanks to all our volunteers, we couldn’t have done it without each and every one of them.

We will be back for 2020 so if you want to take part, drop us an email, fundraising@wsh.nhs.uk and we will let you know as soon as we have a date in the diary.

If you have any questions about fundraising, any of the events mentioned above or how you can help the hospital, please contact fundraising@wsh.nhs.uk or call 01284 712952